Lisa’s passion for music began when most people are still learning their ABCs.  “I was addicted to The Beatles by the age of six,” she says.  Guitar lessons came shortly after.  “When I was ten years old, my father taught me to play three chords on the guitar.  They were the only three he knew,” Lisa reports.  From there, 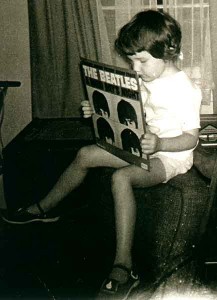 she studied classical guitar and folk: “I holed up in my room after school and pored over the James Taylor songbook.”  Now, she and her dad have come full-circle: Lisa is currently teaching her 79-year-old father to play the ukulele.

Jonathan Edwards & Right Now
An important piece of Lisa’s beginnings as a musician is her working relationship with Jonathan Edwards, the folk legend who wrote and sang the early-70s hit, “Sunshine”.  Early on in Lisa’s life as a performer, she participated in a “round robin” gig at The Folk Way in Peterborough, New Hampshire, where she and two other singer-songwriters took turns playing songs.  “I’ll never forget.  It was a Tuesday night in the winter.  There were twelve people in the audience, because that’s how you start as a new performer.”  She couldn’t see the audience because of the way the lights were set up on stage, so she had no idea who was there.  “But, one guy in the crowd kept yelling ‘woo!’ and ‘yeah!’ during my songs,” she recalls.

After the show, he came up and introduced himself.  It was Edwards.  He said to Lisa, “I love what you’re doing.”  She says she was starstruck, but had the wherewithal to hand him her cassette.  A few weeks later, Edwards called Lisa at home and asked if they could work together.  “He produced and financed my début CD.  We used his recording studio and he paid for the professional musicians who appeared on that album, Right Now, which was released on Edwards’s Rising Records label,” Lisa says.  The duo toured together, and Edwards brought her into the folk music circuit. 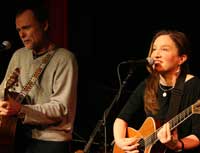 Right Now earned a preliminary Grammy nomination for “Best Album Of The Year” in 1997, but in the midst of enjoying the accolades and success, Lisa was forced to take a brief break because of a serious health issue.  But, because of her belief that “you work your butt off, no matter what’s presented you,” she says, “when I started to get well again, the first thing I wanted to do was get back in that studio.  And I did.  And I finished the record.  And went right out on the road on crutches.  As soon as I could do it, I was out the door.”  Since then, she has released four more full-length albums.

Teaching Guitar
In addition to maintaining — and enjoying — her established career as a performing musician, Lisa also teaches music.  “I found this knowledge and didn’t want to keep it to myself,” she says.  After earning her Bachelor’s Degree in Education from Keene State College, she combined her various skills and abilities, teaching one-on-one guitar lessons to budding musicians in the Brattleboro area.  After a little more than a decade, Lisa’s schedule was full.  Not only could she accept no more guitar students, the waiting list was twice as long as her roster.  The solution?  Teach on-line, where technology allows her to reach a near-infinite number of eager students. 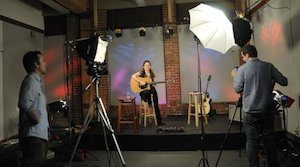 Lisa on Guitar Tricks
Since 2007 Lisa’s online guitar courses have appeared on the Website Guitar Tricks, and CEO John Broderick describes her as one of the site’s most popular instructors.  Lisa says Guitar Tricks is “an online university dedicated completely to guitar studies”.  Students enroll, and have access to thousands of classes, produced and presented by professional musicians.  Her new class, Guitar Fundamentals 1 “is all beginning material.  I don’t assume the student knows anything,” she says.  In twenty years of teaching guitar, “I’ve taught hundreds of people in real-time, and I’ve been asked every question thousands of times.  So, in my course, all of the questions I’ve been asked, I answer,” she says.

Lisa strongly believes in experiential learning, and her lessons ensure even the novice student comes away from the very first lesson with the ability to play at least one song.  She says: “I don’t want to just teach technical skills.  I want students to see the association between notes and chords, and actual music.  If we learn one chord in a lesson, we’ll play a song with that one chord.”  This teaching ethos is what led Lisa to Guitar Tricks.  She was teaching rock-n-roll improv and needed musical tracks for them to play against to challenge and improve their skills.  She went online and found those tracks on Guitar Tricks.  Then one day, as she scrolled down to the bottom of the Website, she saw a solicitation for new teachers.  Wanting to expand her practice and challenge herself as a teacher, she signed up, and was accepted as an instructor.

Love Changes Everything
One creative surprise from the connection between Lisa’s teaching and performing comes from the music she was forced to write for her Guitar Tricks courses.  Although in private lessons she can use whichever songs she likes, Guitar Tricks prohibits its instructors from using copyrighted 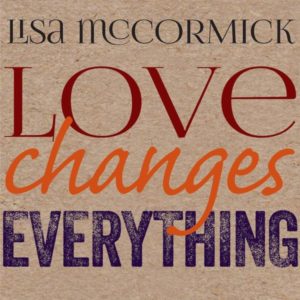 songs and songs from the public domain.  So, she says, “for the course, I had a choice: make up songs, or don’t use songs.”  Wanting to give her students the ability to play actual songs from the first lesson, she chose the former.  A number of the songs she wrote for her online classes ended up on her most recent album,  Love Changes Everything, released in November, 2014.

Lisa still teaches one day per week, and loves teaching face-to-face.  She says, “I want the personal relationship.  I like having a human being come into my house.  It’s good for the soul.  I get to experience the evolution of them as musicians.  I consider it a blessing.”  For those who want the personal relationship but live too far from Brattleboro, Lisa also teaches via Skype, and is currently accepting new Skype students. 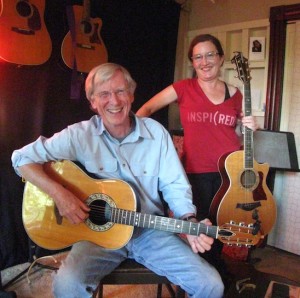 When not performing or teaching, Lisa can be found cooking, snuggling with her big black Maine coon cat, digging around in her cottage garden, or riding around town on her silver Piaggio motor scooter.  She also enjoys going to see other people perform music, especially local musicians.  “I prefer to keep it close to home,” she says.